Slightly more than 100 cases of Middle East Respiratory Coronavirus  (MERS-CoV) infections have been reported from around the world. Despite these few numbers, the actual count of cases is uncertain as is the geographic distribution of the cases.  The case count varies from 94 to 104 as noted in the table below compiled from several sources. [1,2,3,4] 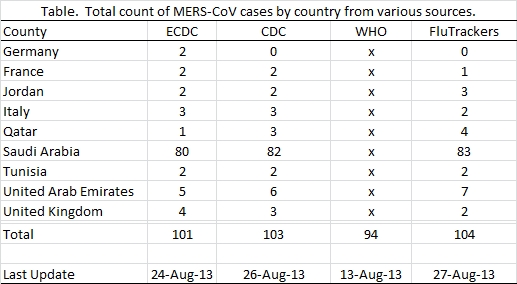 A review of these reports indicates that the variability in the counts results from several factors. First, some reports such as those from the World Health Organization (WHO) are not current and up-to-date. The fact that WHO is not stating the count by individual member states indicates uncertainty about how to report the geolocations of individual cases (see discussion below). Second, some agencies such as WHO only count officially confirmed cases, while other case lists seem to include probable and suspected cases as well. Third, compounding the enumeration problem is that sometimes asymptomatic cases that test positive for the disease are not counted as a confirmed case.

As noted in the table, there is a differential assignment of cases by geographic location.  There is general agreement on eight countries where MERS-CoV infections have taken place, France Italy, Jordan, Qatar, Tunisia, Kingdom of Saudi Arabia, United Arab Emirates, and the United Kingdom(see map below). However, The European Centre for Disease Prevention and Control (ECDC) appears to consider the location of treatment rather than where the infection was acquired as the primary geographic location. That is why the two cases that were infected in the Middle East but were treated in Germany are counted as cases from Germany by the ECDC. 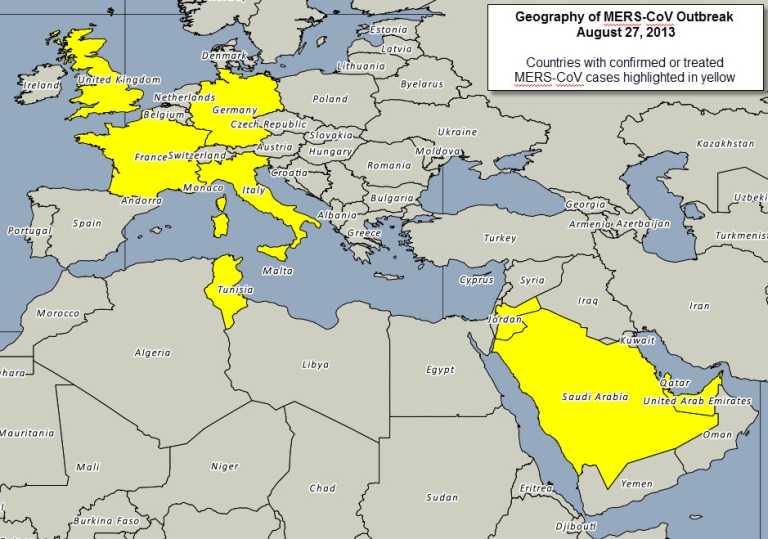 Fnally, more than 75% of all of MERS-CoV cases have been reported from the Kingdom of Saudi Arabia. Much of the confusion about the number of cases and number of deaths from this deadly disease could be cleared up if the Ministry of Health in Saudi Arabia was more forthcoming and provided more detailed information about the MERS-CoV cases that are occurring in this country.

This work by Laidback Al is licensed under a Creative Commons Attribution-ShareAlike 3.0 Unported License.